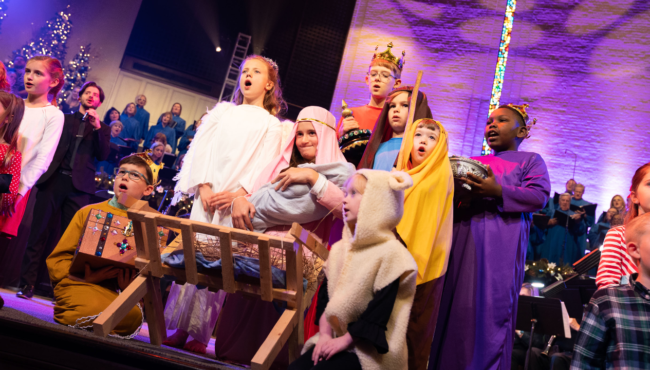 A very creative children’s Sunday School teacher asked her class to write and act out their own version of the Christmas story. It had some traditional parts, but a very unexpected ending.

There were familiar members of the cast—Joseph, the shepherds, the star, the wise men, the animals, and the angels. But Mary was nowhere to be seen. Suddenly, from behind some bales of hay, they could hear the moaning and groaning of someone in pain. Evidently, Mary was in labor!

About that time, a doctor arrived dressed in a white coat with a stethoscope around his neck. You could see the relief on Joseph’s face as he took the doctor straight to Mary, then started pacing back and forth. A few minutes later, the doctor emerged with a big smile on his face and said, “Congratulations, Joseph! It’s God!”

This is the Christmas story. God decided to visit earth in human form in order that He might communicate to us how much He loves us and give us a pattern for life. Isaiah said, “He will be called Emmanuel—“God With Us.”  (Isaiah 7:14) John said, “The Word became flesh and dwelt among us.” (John 1:14)

I remember a Sunday School teacher in high school telling about a cold, winter Christmas Eve when a farmer and his family were huddled around the fireplace in their home. They kept hearing something and the farmer noticed a large glass window where there were a few sparrows who were trying to fly through the glass in order to get to the fire to warm up. They kept hitting the glass.

The farmer wanted to help them, so he went outside and tried to speak to them, but they wouldn’t listen. He then took some breadcrumbs and made a trail out to the barn where they could go in and be warmer. He tried to communicate to them to follow the trail of bread, but they didn’t understand.

He tried other things to get them to safety. They just thought he was some unknown creature who was trying to hurt them. They didn’t understand that he really wanted to help them.

The farmer remembered the Christmas story about how God became a man in order that His Son could communicate to us. It then dawned on him that the only way that he could communicate with them would be for him to become a sparrow and show them the way to warmth and safety.

The teacher wanted to point out that the farmer’s desire to become a bird would in no way compare to God’s decision to become a baby. It does give us insight. God became flesh and dwelt among us.

A thousand times a baby has become a king, but only once, has a king become a baby. King Jesus became a Baby in order that He might guide us to salvation, safety, and security. Unexpected, but it was God’s perfect plan to help people live the full abundant life and spend eternity with Him

The birth of Jesus teaches us that Christmas can be real in our lives every day. It also means that as we enter 2023, we have a Companion, Friend, Savior and Lord, who will help us make every day count. Jesus was the perfect gift at Christmas because He is God.