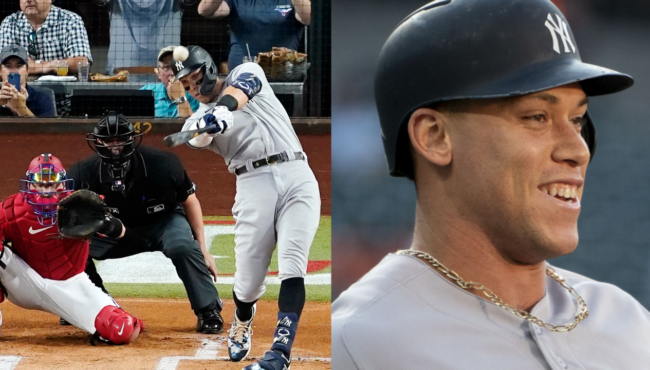 The baseball world was focused on the second game of the Yankees’ Series with the Rangers. The 38,832 people made it the largest paid attendance in Globe Life Field’s two-year history. This was next to the last opportunity for Aaron Judge to break the American League home run record held by Roger Maris.

Interestingly, it was the third pitch by the Ranger’s pitcher, Jesus Tinoco. That’s right, his name was Jesus Tinoco. It was a slider clocked at 88.4 miles an hour. He connected with the pitch, and it ended up 391 feet away in section 31, row 1, seat 3. It was caught by a Dallas resident, Corey Youmans. The ball is reportedly worth more than $4 million!

Roger Maris, Jr. was in the stands. His dad had held the record for years. He complimented Judge by saying he was glad that a man of his character and integrity broke his dad’s record.

There is a section in Yankee Stadium that fans refer to as the Courtroom. They wear black robes. When Aaron Judge comes up to bat, they start chanting, “Here comes the Judge” and “All rise.” Yankee Stadium comes alive. Aaron Judge then gives them even more to cheer about.

Aaron Judge is a class Christian gentleman. He stands 6 feet 7 inches tall and weighs 282 pounds. He’s a big man, but he is even bigger in terms of his faith in Jesus Christ.

When asked how he handled the stress of the last few games of the season, he said he did it by trying to take one day at a time and to pray a lot. He always commented about how much prayer and his relationship to Jesus Christ meant in his career.

Judge was carrying a copy of II Corinthians 5:7 in his pocket when he broke the record. He said, “It’s one of my favorite bible verses. I try to live my life by it and always trust the Man above and what He’s got in store for us. We never know what’s around the corner, but if we have faith in Him, He will guide us in the right direction.” What’s in your pocket?

Last year, he married his high school sweetheart. In today’s world, it’s good to see a couple who love each other, not because of the success of one of them, but because of their long-term commitment to Jesus Christ and to each other. He and his wife are doing so many things together to enhance the lives of many, many people.

He was adopted and his parents never told him until he was ten years old. Judge is a great reason to oppose abortion. He said that God really blessed him with such supportive parents. They try to stay out of the limelight.

I love reading about Aaron Judge. May God increase his tribe. I hope you will share with a lot of high school and little league baseball players the real values of Aaron Judge.

When asked about his priorities, he quickly said, “My Christian faith, my family, and baseball.” He knows what’s most important in life.

I like his attitude of constantly improving. He said recently, “If what you did yesterday still seems big today, then you haven’t done anything today.”

What are you doing today?