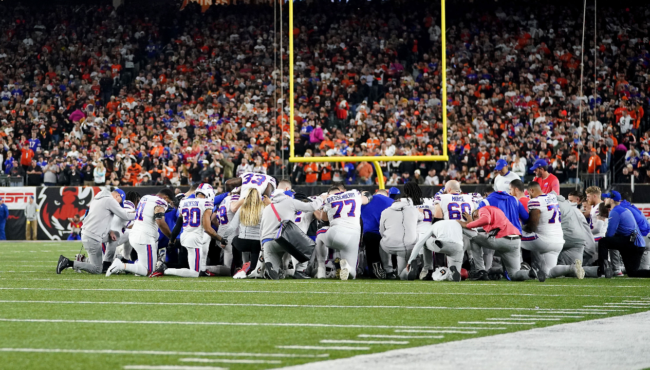 On Monday, January 2, 2023, one of the most important NFL games of the year was just ten minutes into the first quarter. The outcome of this game between the Buffalo Bills and Cincinnati Bengals would influence the playoff status of several teams.

An unexpected thing happened. Buffalo Bills safety, Damar Hamlin, tackled Bengals Tee Higgins. Damar got up, took a couple of steps, and then collapsed on the field because of cardiac arrest.

The medical teams from both sidelines were on the field immediately and started medical procedures including CPR. After 30 minutes, they placed Damar in an ambulance and carried him to a Cincinnati hospital.

Prayer was primary for most every person. Nobody was debating whether or not you should have prayer at a football game or that players could kneel and pray. ESPN analyst, Dan Orlovsky, told viewers nationwide, “Maybe this is not the right thing to do, but I want to.” He said that the Buffalo Bills organization believes in prayer. He prayed, “If we believed prayer didn’t work, we wouldn’t ask this of you God. We believe in prayer…..” Marcus Spears and Laura Rutledge said, “Amen.” Google the whole prayer that he prayed.

People have continued to pray around Buffalo, New York, Cincinnati and everywhere. It is reported that people meet on street corners, public places, and designated venues, and circle up and pray. I think Damar is the most prayed for person in America!

This event has reinforced many beliefs and commitments for me. Here are two that I will share:

The Bible says that sincere, passionate prayer of a righteous person avails much. (James 5:16) Mark records the healing of a young boy by Jesus. When the disciples questioned why they couldn’t heal him, Jesus said, “This kind can come out only by prayer.” (Mark 9:29)

Practice praying daily and experience the power of prayer every day this year.

The coaches were reminded of that lesson during the time that doctors were administering to Damar on the field. Bengals Coach Zac Taylor and Bills Coach Sean McDermott were standing with their arms around each other. It was still undecided if the game would be resumed. McDermott told Taylor, “If they resume the game, I am not coaching it. I’m going to the hospital with my player, Damar.”

Begin each day in 2023 answering the question, “What and who is most important in my life?” Don’t get your values inverted. Read Matthew 6:33 and Matthew 22:37.