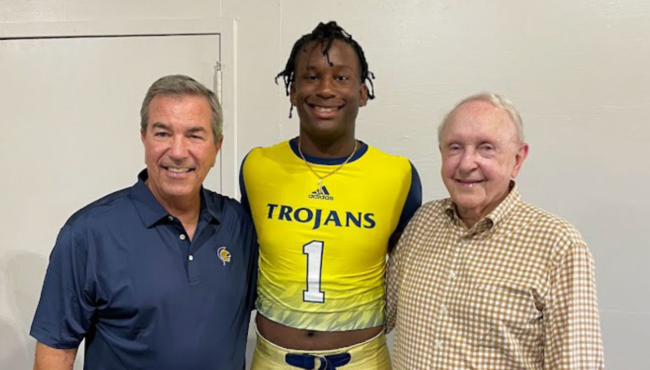 One of the best examples of this is Coach Jimmy Perry. About thirty years ago, he was one of the top weightlifters in the state and was a runner up to the Mr. Alabama contest. He then discovered he had to have a kidney transplant.

I went to Birmingham with him. His faith was radiant! The transplant was successful.

Last November, as he and his wife, Judy, were driving to Birmingham for a check-up, they received a phone call from the Alabama High School Athletic Association congratulating him on being selected to the Alabama Football Coaches Hall of Fame. He was on the mountaintop.

Later that day in the doctor’s office, the examination revealed clear cell cancer. They told him that he only had less than three months to live.

From the mountaintop to the valley. It was a long drive back home. But Jimmy has a strong faith, a great attitude, and a lot of people praying for him.

Thanksgiving and Christmas of 2021 were really tough as Jimmy processed the fact that this would be the last ones he would spend with his wife, kids, and grandkids. His faith was strong.

He and Judy went back to Birmingham for his final check-up in January 2022. His doctors were immediately amazed because they couldn’t find the cancer! The doctor asked him what he had been doing. Jimmy replied, “We have been praying.” The doctor’s reply was, “What you’re doing is working a whole lot better than what we are doing.”

The doctor then said we have one more test we need to run involving your DNA. He said there’s only a one percent chance that this test will prove that you are clear. Jimmy looked at him and smiled and said, “One percent and God is all the odds I need.” Jimmy was right. The test showed complete healing!

As usual in August, he invited me to come over and speak to his football team and their parents at the beginning of the season and have a prayer in the locker room for the families.

The picture above shows us with his quarterback, K.J. Jackson. He is a big boy. I offered to give K.J. a few tips of playing quarterback, but Jimmy wisely said we didn’t have time!

Saint James had its best season ever. They played Piedmont, the defending state champions, in the Championship game and were trailing 20-10 at the half. Jimmy and his staff made adjustments at halftime and came out and scored 35 points and won 45-28!

K.J. threw for 5 touchdowns in the second half and was the MVP. He is only a junior and had 41 touchdown passes for the year!

How do you handle the mountaintops and the valleys?