What is a Saint? 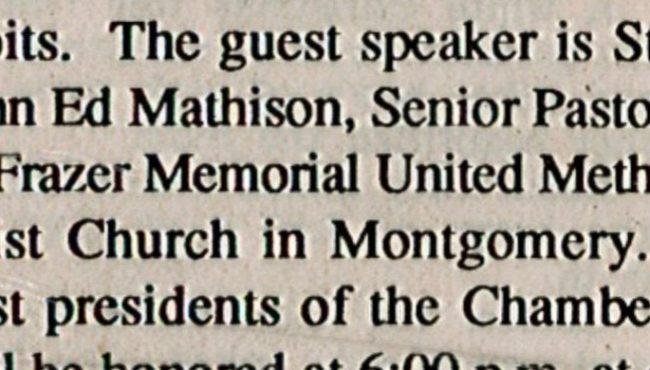 WHAT IS A SAINT?

I preached at the First United Methodist Church in Ozark, AL, in November 2020. I shared that one of the most unusual things that has happened to me in my ministry occurred in Ozark. Because people sometimes think that preachers make up stories, I actually carried a copy of the incident as reported by the Ozark newspaper, The Southern Star,  to show that I was telling the truth.

The occasion was an incident when I was invited to speak at the annual membership banquet of the Chamber of Commerce at the Ozark Civic Center on Tuesday, January 16, 1996. The theme of the banquet was “Life in Ozark.” It included a lot of displays by students and adults and displays showcasing some of the industries’ products in the area. The newspaper had a huge misprint when it reported, “The guest speaker is St. John Ed Mathison, Senior Pastor of Frazer Memorial United Methodist Church in Montgomery, AL.”

Wow, talk about a misprint! I was referred to as “St.” rather than “Dr.” John Ed Mathison. I think the most amused persons were my wife and good friends who know me best.

This “misprint” got me to thinking about saints and who is a saint. Some people are declared to be saints posthumously. Sometimes people refer to saints as people who don’t engage in some of the obvious sins. Often, we refer to somebody by saying, “He’s certainly no saint.”

But the Bible teaches something different. I learned that a person does not have to die to be a saint. Many saints are alive today.

A little boy and his grandfather were visiting a cathedral with stained glass windows showcasing several saints. The sun shining through the windows created a life-like picture of each person. The grandfather pointed out St. Peter, St. John, St. James, and St. Paul.

The grandfather asked his grandson, “Do you know what a saint is?”

The little boy thought a minute and then said, “Yes, sir. I think it’s a person that God’s light shines through.”

That’s it – that’s a saint! It’s one who allows the light of Christ to shine through. I think Christ calls each of us to invite Him into our lives and let His light shine through us.