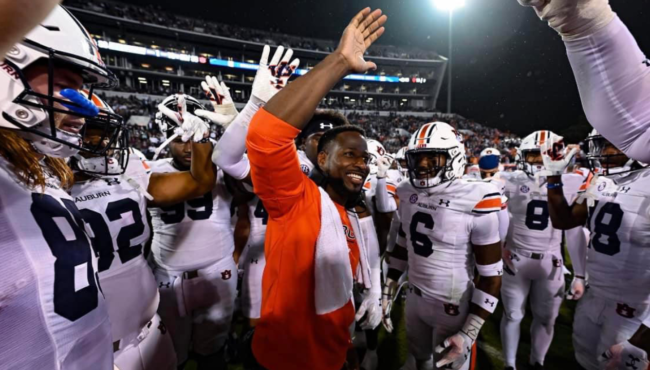 College football has become big business. The introduction of the NIL-Name Image Likeness—has made it possible for players to get paid huge amounts of money. Some college players are making well over $1 million a year.

The introduction of the Transfer Portal has also revolutionized football. If you have a good NIL program, you can get a lot of players out of the transfer portal who add tremendously to your team. Signing on recruiting day is still important, but so many of those high-round recruits wind up at another school.

The buy-out for head coaches in the SEC, who get fired, has become one of the most lucrative professions anywhere. Someone said that if you can ever get a head coaching job, you will be set for life.

Auburn had a coaching change on November 1. It was a culmination of a lot of discussion over the last couple of years. The fired coach Bryan Harsin should be able to live on the buy-out!

An interim coach was named the next day. It was Carnell “Cadillac” Williams. He is a former great running back. He was the coach for the running backs for Auburn this year.

Cadillac is a breath of fresh air for college football. He came in with energy and enthusiasm. He had no experience as a head coach, and only four days to prepare for Mississippi State. Five of the assistant coaches had also been fired. With little time to prepare, Auburn went into the game with an inexperienced head coach and an offensive line coach in charge of calling the plays. No wonder Auburn was a big underdog.

But Cadillac did not dwell on how bad the situation was. He began by thanking God for the opportunity he was given. His enthusiasm and energy were contagious. Auburn almost upset Mississippi State. They lost in overtime.

But did they really lose? They did on the scoreboard, but in the post-game conference, Coach Williams talked about the Chapel service for the team on Friday night. I’ve had the opportunity to speak at that service. The FCA Chaplain at Auburn is my good friend, Chette Williams. He and Coach Williams have more in common than the same last name and the same initials—they have the same values about winning.

In the Chapel Service on Friday night, Coach Williams reported that eight football players accepted Jesus Christ as their personal savior! Wow! Coach Williams was excited about that. In my opinion, that’s the most important thing a coach can do. In the future, people will forget the score of the game, but for eternity people will remember the win that night in the Chapel service.

I don’t know how the future will go with Coach Williams, but he has certainly injected a great perspective that I think that all coaches should follow.

The question for you and me is—what kind of energy, discipline, teamwork, and “never quit attitude” do we bring to our work every day? Is our job a platform for doing ministry? I recognize there are some HR guidelines that have to be followed, but within those how can I win people to faith in Jesus Christ?