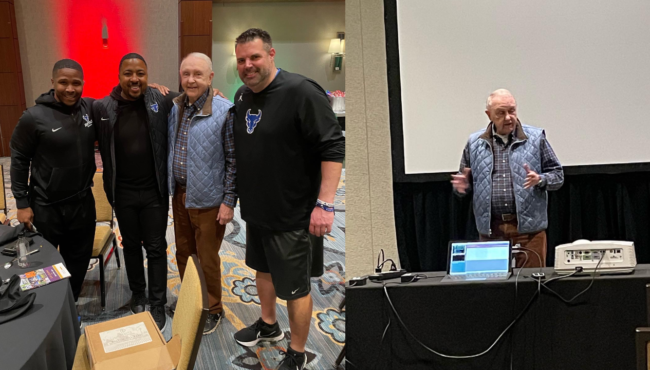 ESPN loves Montgomery. While a lot of different cities would like to have a bowl game, Montgomery has two! We just completed the Camellia Bowl on Tuesday, December 27, 2022.

I serve on the River Region Sports Commission. This group initiates and promotes sporting events throughout the River Region. Our key person is Johnny Williams, who has a great relationship with ESPN. The chairman of the commission is Dr. Karl Stegall.

The Camellia Bowl featured the Buffalo Bulls playing the Georgia Southern Eagles. It was a beautiful day and we had a huge crowd. The east stands were full.

Buffalo played under tremendous adversity. They left Buffalo, New York at midnight on Thursday in order to get ahead of the huge blizzard. The band, cheerleaders, school officials, and fans were not as fortunate. They got snowed in and were unable to come south for the game.

Buffalo has a great coaching staff and team members. One thing they do is have a team chapel the night before each game. The person who does their team chapel was grounded in Buffalo. The coaches inquired about someone to do the chapel and Karl suggested me. I accepted.

Tim Lee and I went about 30 minutes early to the Renaissance Hotel. The head coach, Mo Linguist, asked us to sit down and talk with him. He had a lot of responsibilities, but we spent 30 minutes before the team chapel talking about life and how to make a difference in the world and we all prayed together.

The coach told me a lot about his faith journey. He begins every team meeting by placing in big letters on a powerpoint one word—TODAY. They talk about forgetting yesterday and not trying to live in tomorrow, but how is God going to use them today to fulfill His purpose for their lives. He says “TODAY” and they repeat back to him “TODAY.” They do it several times.

You can guess how I started my devotional. I looked at them and smiled and said, “TODAY”. You could see their faces brighten up and they all said “TODAY”. I shared with them how God has a plan and purpose for their life—TODAY.

Coach Mo shared that it’s tough being in Montgomery, Alabama when your family, friends, and fans are back in Buffalo, New York. He shared with me a picture of his wife and three kids. They just had a new baby son born the day before the team left for Montgomery! The baby was in the picture.

Despite the adversity, Buffalo beat Georgia Southern 23-21! The post-game celebration on the field was special. When ESPN interviewed Coach Mo, the first thing he said was, “We give the glory to God.” When they interviewed the player who was selected as the most valuable player, he began by saying, “I want to thank God and give Him the glory.” In accepting the Camellia Bowl trophy, Coach Mo thanked Montgomery, the appropriate officials, etc. and then even thanked Reverend Mathison for speaking to his team!

It was a great experience for me to meet a group of college coaches and players who were doing it right! They were polite, humble, talented, competitive, and ready to give God the glory.

2023—TODAY—Paul said, “Forget those things which are behind and reach forth for the things that are before you and press on toward the mark of God’s high calling for your life.” (Philippians 3:13,14) Follow that plan and you will be a winner!